If you watched the recent TV show Chernobyl, you will have undoubtedly been fascinated by the depiction of what went on in the control room on the night of the disaster.

Rules were broken left, right and centre by the most senior person in the room and the employees around him struggled to speak up and challenge his authority. It echoes the premise of the book Black Box Thinking which talks about cognitive dissonance.

Cognitive dissonance is a theory that the more firmly we hold beliefs, the harder it is to let them go when contradictory evidence is presented to us. Having to admit we were wrong doesn’t come naturally, we’d rather insist we were right. And this is particularly a problem for people in senior roles or positions of trust.

And this of course has implications for employee voice. While Chernobyl is an extreme example, it does demonstrate the importance of everyone having a voice, a safe space in which to share it, and for it to be listened to.

It’s also worth saying that for employee voice to be effective, it needs to be informed. In his research, Dr Kevin Ruck has found that

Let’s apply this to the Chernobyl example. One of the many reasons the employees didn’t challenge more confidently is because they couldn’t understand why their manager was insistent on pushing ahead, so therefore couldn’t address the root cause. 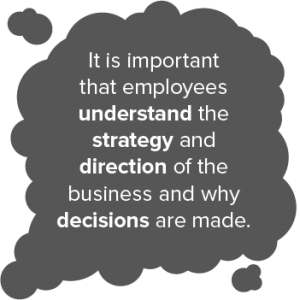 Obviously, in this example there were some dodgy dealings at play, so employees would never have been party to that information, but the scene demonstrates the point of how difficult it is to challenge when you don’t understand the bigger picture of what’s going on.

And while it’s not possible for employees to know everything that goes on in a business, it is important that overall they understand the strategy and direction of the business and why decisions are made so that they’re in a position to engage with the organisation in a meaningful way.

So, how do we facilitate employee voice inside our organisations? Here are our top five tips…

For employee voice to be effective, it needs to be listened to. It sounds obvious but so often ideas, opinions and feedback are shared and then disappear into the ether.

Encourage leaders and managers to really listen with an open mind and be willing to take on board what’s being said rather than treating it as a tick box exercise.

But that does mean being vulnerable and realising that it’s OK to not know everything and to change your views based on new information or a different perspective. That’s one of the things that went wrong in the Chernobyl control room, the team leader’s inability to admit he’d lost control and didn’t know what to do.

And don’t forget to communicate changes that have been made as a result of employees’ suggestions. It may seem obvious to you that an initiative was started following an employee’s idea, but it may not be obvious to others. It’s important to share examples of the business listening for other employees to trust that their voice will be heard too.

Trust is a key component in employee voice. There needs to be a culture that supports and welcomes employee voice and where employees feel safe to speak up. A culture where trust is waning or non-existent is not the sole job for internal communications to fix, but it needs to be recognised as being detrimental on your efforts to engage employees.

When workers at the nuclear power station tried to speak up, they were quickly shut down. Their colleagues who witnessed it were then unlikely to raise their voices.

A lack of trust can manifest in other ways too, such as whether leaders and managers respond to employees in a transparent way. There will always be some things you can’t say, and it’s ok to say that. If you fudge an answer filled with half-truths, employees will know. Once broken, trust is very hard to get back.

When employee voice is missing, it’s often because there isn’t clarity on where to share it and how to respond to it.

Provide a clear framework for how to facilitate employee voice. Help people understand where and how they share it and how leaders listen and respond.

This doesn’t need to be a rigid set of rules that restricts authentic conversation, but simply guidance that helps people understand that they can share their voice on Workplace for example, and leaders know to be visible and active on that platform. Or that it’s done via regular face to face opportunities or line managers.

The latest Gatehouse State of the Sector research found that line management is still a major barrier to effective internal communication. This is despite it having been identified alongside employee voice as an enabler to employee engagement back in 2009 as part of Engage for Success.

Line managers can be an important way for employees to have a voice inside the organisation, but they’re often unsupported by not having the right skills and resources to help them communicate and might not know where to share the feedback or questions they’ve received.

Provide communication skills training for line managers that includes how to listen, where they can keep informed themselves and how to respond to employees.

When leaders or line managers respond to employees, they can often adopt a very corporate tone of voice (verbally or in writing) and start throwing in jargon and complex explanations. Employees won’t engage if they can’t easily understand what’s being shared and if they feel the person sharing it isn’t being genuine and is hiding behind complicated language. This quickly erodes trust.

Encourage leaders to imagine explaining a work situation to their friend in the pub and think about the type of language they’d use. It’s unlikely they’ll mention paradigm shifts or boiling oceans.

We need to focus on having conversations rather than cascading information up and down our organisations, and conversations work best when they’re natural, relaxed and jargon free.

While it’s unlikely most of us will deal with the extreme type of toxic culture demonstrated in Chernobyl, it was a stark reminder of why employee voice is so powerful and important. As internal communicators, we have a clear role in enabling and facilitating it and advocating its place inside our organisations.

By Helen Deverell for Alive with Ideas