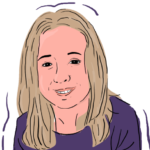 Hurdles come in all shapes and sizes and, while all valid and very frustrating, it’s the larger ones I’m talking about here.

You know, the ones that completely throw you off guard, toppling the confidence you’ve been building and developing a mental wall between you and potential opportunities. But what counts is having the ability to bounce back from them and try again.

Norman Vincent Peale, author of The Power of Positive Thinking, once said:

‘Shoot for the moon. Even if you miss, you’ll land among the stars.’

By trying new things and battling the nerves that may otherwise hold you back, you can open your world up to astronomical advantages!

How I landed among the stars

I recently auditioned for a school production, Annie, and after having performed in a local musical only weeks previously, my nerves were calmed by a highly welcomed sense of self-confidence.

Filled with anticipation, two friends and I hurried down to the drama block early on the morning that the cast results were announced. I’ll never forget seeing my friends’ faces light up as they spotted their names on the list. Mine wasn’t there. I remember one of them bragging to me for days about how she got a part. I wanted to disappear into a black hole…

I also remember feeling the self-confidence that had motivated me to audition slipping away. Suddenly the only thing that seemed important was that cast list. Despite this feeling of failure and low self-esteem, a few weeks later, I found the confidence to go along to a much more professional audition for a big stage show. After having my self-belief knocked, I was much more nervous this time. But you know what? I got a part! I was over the moon. After feeling so disappointed in myself, I had a wonderful new opportunity ahead of me!

And this pushed me to volunteer for even more amazing things that led to some fantastic outcomes.

Five ways that new opportunities enable us to shine

Recent letters and emails from school have also given me such a boost, with comments such as ‘You were absolutely fabulous’ and ‘Your respect and maturity are very much valued’.

The power of saying YES to new opportunities

And that really proves, doesn’t it, that stepping out of your comfort zone and grasping new opportunities doesn’t have to be scary or daunting. It can be incredibly rewarding. Change your perspective of the unknown; see it as something exciting, something to look forward to. A gentle nudge in a new direction. And yes, there will be hurdles along the way. And yes, they may knock you over, stop you in your path and hold you back. But get up and leap right over them!

Remember, by stepping out of your comfort zone, you can fill your world with bigger and brighter moments. Believe in yourself.

By Evie Roodhouse, age 12, for Alive!