Seize the day: six ways to make the most of your time

As communicators, we’re rarely short of things to do.

We rush around ticking things off our to-do list, but like a leaky rowing boat it quickly fills again.

It’s important to prioritise of course, but performing to our potential also means making the most of each day. And science can help steer us in the right direction.

In When, Dan Pink highlights research that suggests our ability to surf the peaks and troughs of each day governs our effectiveness more than we may think.

For example, many of us experience the mid-afternoon trough. Our attention wanes as our brains struggle to get out of third gear. But does it really make much difference?

Well – yes. Studies show that this trough can have a dramatic effect on performance. Attention to hand washing in hospitals can fall by almost 40%. Medical errors are up to three times more likely. Driving-related accidents spike. Employees are less likely to act ethically. Overall, our performance can fall by around 20%. 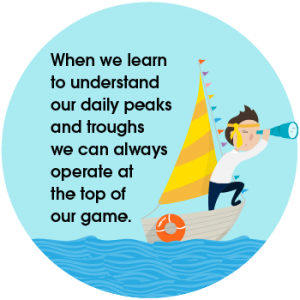 By understanding our daily peaks and troughs we can make sure we’re always operating at the top of our game.

Here are six ways to plan your perfect day.

We all experience each day according to our ‘chronotype’ – a natural pattern of peaks and troughs dictated by our circadian rhythms. Around one in six of us are larks: rising and hitting the sack early. One in five are owls, rising late and still thriving well into the evening. The rest of us are what Pink calls ‘third birds’: somewhere between these two extremes.

You probably have a good idea of your type already, but you can check by taking Pink’s test at www.danpink.com/MCTQ

The key is to manage your day, where possible, in line with your type. Owls loathe early mornings, so they function better when they start their day later. Larks and third birds will both hit their daily trough in the afternoon, and should plan their day accordingly.

And if you want the best from your team members, make sure you know their type too. 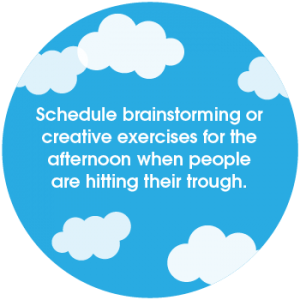 Whatever our type, we all experience our day as a peak, a trough and a rebound – our second most productive time of the day. These phases affect both our performance and our mood.

So it stands to reason that our most taxing tasks – analytical work and decision making, for example, should be done when we’re at our peak. Unless you’re an owl, that usually means the morning.

For communicators, it also suggests that key work events will be more effective if they’re held in the morning.

One American study, for example, looked at the impact of timing on over 26,000 earnings calls – webcasts or teleconferences where company leaders discuss their business performance with investors and financial analysts. The researchers found that morning calls were more positive than those held later in the day.

Save creative tasks for the afternoon

Conversely, creative tasks are better saved for when we’re not firing on all cylinders. With our brains operating a few notches below their peak, we’re less alert to distractions and have fewer inhibitions – making creative flashes of insight more likely.

This is sometimes called the inspiration paradox: innovation and creativity often blooms when we are not at our best.

So if you’re planning a brainstorming exercise or creative visioning exercise then you’re better off scheduling it in the afternoon: when most of your group will be hitting the trough.

Decision making and other mentally-taxing tasks drain our energy, often without us noticing. Planning frequent breaks can counter this effect.

One useful tactic is the Pomodoro Technique. Using a Pomodoro timer app, set a work period – usually 25 minutes – then rest for 10 minutes before repeating as many times as you like. It’s a great way to overcome procrastination, focus intensely – and make sure you take regular breaks.

But the right kind of break is also important. According to Pink, the perfect science-backed break to recharge your batteries would involve: 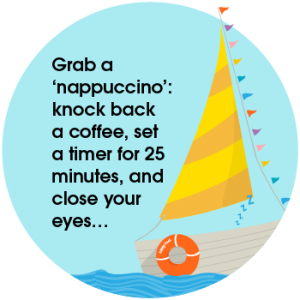 Unless you work for the likes of Nike, Uber or Ben & Jerry’s – all of whom have embraced napping at work to improve performance – you may want to reserve this for your work at home days. But science shows that short naps of between 10 and 20 minutes really do boost alertness and mental capacity, leaving you more productive for the rest of the day.

Pink’s specific prescription is a ‘nappuccino’: knock back a coffee, set a timer on your phone for 25 minutes, and close your eyes. As the caffeine takes about half an hour to kick in, it will help to shake off any sleepiness just as you’re waking.

A recent poll revealed the average British worker takes just 34 minutes for their lunch break. Even more worryingly, a majority of employees were found to skip their lunch break altogether.

But this habit can be counterproductive. A 2016 study looked at the lunch patterns of more than eight hundred workers from eleven different organisations. Those who took lunch breaks away from their desks showed less stress and exhaustion than colleagues who ate at their desks – not only during the rest of the day, but also a full year later.

And a 10-month Israeli study found that judges were far more likely to release prisoners for parole after taking lunch and mid-afternoon breaks. In fact, the chances of parole for those unfortunate souls whose cases were reviewed just before a break were almost zero.

So now you know the impact of our daily peaks and troughs, why not take a fresh look at your diary and see how you can better surf the waves of the day? What can you reschedule to tackle the right tasks at the right time? And how can you give as much attention to your breaks as you do to your appointments? Your perfect day may be just around the corner.

By Dave Wraith for Alive!