Creativity stalling? How to navigate a mental health roadblock

Have you ever been a tourist in a city such as London and tried driving during rush hour?

You’re faced with hundreds of unfamiliar roads and a frenzy of people and vehicles, coming at you from every angle and all fighting to get where they want to go.

Such a journey may at best be frustrating, but at worst feel completely overwhelming – especially if you have a place you need to reach by a certain time, you don’t know how best to get there, and the clock is ticking…..oh, and messages are pinging through all the time, asking you to make more and more journeys.

You may end up wanting to scream, cry, or just to retreat altogether and hide under a rock.

That’s what it can feel like when the creative brain is experiencing extreme stress. While some people thrive under pressure, if that pressure is too great, or it is sustained for a long period of time, then it can become debilitating. Paralysing. Frightening even. And creativity, as well as happiness and wellbeing, may end up paying the price.

Because if we think of the creative brain like a transport network, then it makes sense that if the routes are clogged up with traffic and stress levels are high, it’s going to be impossible for creative thoughts to flow.

What’s getting in the way?

Everyone suffers from creative block at one time or another. Whether it’s tiredness or the brain needing more time to process what is being asked of it, they just happen. But aside from these short-term roadworks, bigger issues can come into play when the noise and traffic simply become too much.

Some of the most common reasons include anxiety, fear of failure or other people’s opinions, not feeling worthy, a loss of purpose and perfectionism. Problems may also be routed in a physical condition, or an event or traumatic episode. Any and all of these things can impact negatively on mental health and stop creativity in its tracks.

A recent study by King’s College London has also revealed that people who are relatively creative are more likely to develop mental health problems, such as bipolar disorder and severe depression, and individuals who are very creative face an even higher risk. 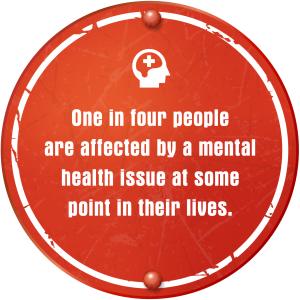 Ideas for beating a creativity roadblock

So, what can you do about it?

Firstly, if you’re feeling overwhelmed, then remember you are not alone. One in four people are affected by a mental health issue at some point in their lives. There’s loads of help available, so never suffer in silence. Take that first step and make sure you have the support you need.

As for navigating a creativity roadblock, while it’s important to work on any underlying issues that may be causing your creativity to stall, here are some strategies that can help get the ideas flowing again.

Start by asking, what would a 5-year-old see? What would they do? Make it a game. Make it fun. Go wild. Be crazy and have no limitations. 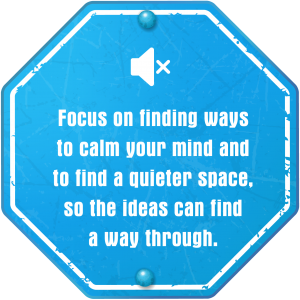 While it would be great if we could simply shift our brains into a creative gear whenever we wanted, it’s not something you can force – especially if you’re battling against a mental health roadblock. Instead, focus on finding ways to calm your mind and to find a quieter space, so the ideas can find a way through.

Many of the best ideas often show up at the most surprising times and in the most unexpected of places. So, go for a shower, a drive, a swim, to the movies, or let your brain work on it overnight while you sleep. There’s no right answer. The point being that starring at a blank computer screen is unlikely to give you the answer you seek. It’s time to try something different.

Mental Health Awareness Week (13-19 May 2019) aims to bring people together to start conversations around mental health that can change and even save lives. For more information and advice on the issues mentioned here, visit: http://www.mentalhealth.org.uk