We all know that diversity in the workplace is a great thing, but did you know that it is also proven to be better for creativity?

Before we dive into the science, let’s clarify what we mean by diversity. Diversity includes demographics such as age, sex and race and in this case we are also including psychological or ‘deep-level’ diversity such as personality, abilities and values.

Think back to all the people you’ve worked with creatively. Who wowed you or helped you to wow yourself? Were they of a similar background or personality to you? Or did they bring something a little different to the party? (Maybe share this article with them to reconnect – hey buddy!) 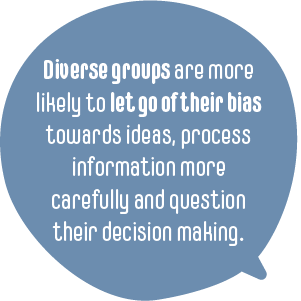 If everyone on a project is similar, the creative process can get a little…sheepy. By this we mean homogenous groups are more likely to agree and are less motivated to innovate – not more likely to eat the furniture or poop on the carpet.

Diverse groups are more likely to let go of their bias towards ideas, process information more carefully and question their decision making. Alternative perspectives jolt the group out of creative ruts and force them to sharpen their thoughts. It may take longer to generate creative ideas, but boy oh boy will those ideas be worth the wait.

[Financially literate people were put in simulated markets and asked them to price stocks in either ethnically diverse or homogenous teams. Individuals who were part of the diverse teams were 58% more likely to price stocks correctly, according to the study, published in the journal PNAS.]

This means that diverse teams are more likely to become aware of their entrenched ways of thinking that can blind them to new information, constantly reexamine facts and remain objective. They may also encourage greater scrutiny of each other’s actions, making them sharper and more vigilant.

Another study, published in Economic Geography concluded that cultural diversity increases innovativeness. They pooled data on 7,615 firms and revealed that businesses run by culturally diverse leadership teams were more likely to develop new products than those with homogenous leadership.

Social Scientist Adam Galinsky tracked business school students during a 10-month MBA program. He tested the students using standard creativity measures at the beginning and end of the school term. They found that students who’d dated someone from another country during the term became more creative.

Alex Gorsky, Chairman and CEO of Johnson & Johnson and Chair of the Business Roundtable Corporate Governance Committee, said in 2018 that his company “has learned through 132 years of experience that true innovation is seldom the work of solitary genius. Rather, it is the result of collaboration enriched by diverse opinions, approaches and experiences.”

Diversity is GREAT for creativity. And we sure love creativity around here. But creativity isn’t always the most helpful asset when it comes to simply ‘getting things done’. Awesome ideas aren’t much use in the bigger picture if they are not curated and implemented effectively. 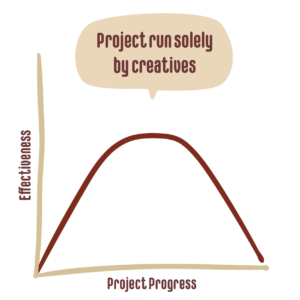 The team required for the implementation stage should be chosen based on their problem solving, logical, project management abilities. Creativity sidles out of the equation at this tangent.

The Harvard Business Review revealed that: “a meta-analysis more than 10,000 teams indicated that the creativity gains produced by higher team diversity are disrupted by the inherent social conflict and decision-making deficits that less homogeneous teams create.”

This suggests that while a diverse team is useful in the creative stages of a project, a more psychologically homogenous team may be more effective in ‘making it happen’ due to the more left-brained, cohesive approach required.

This is where our matrix goes a bit droopy.

So what’s your point? 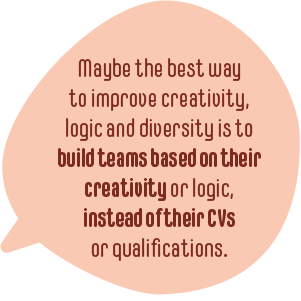 Yes, diversity does boost creativity, and is always a good idea. But creativity is just one stage in the process of innovation. Implementation is where the logical, left-brainers shine.

Maybe the best way to improve creativity, logic and diversity is to simply build teams based on their creativity or logic, instead of their CVs, backgrounds or qualifications – that alone would do wonders for diversity. It may even be that creativity may lead to diversity more than the other way round.