#Awkward! Breaking through the taboos with good design

There are certain subjects that can be… well…. rather uncomfortable to talk about. Rightly or wrongly, they can be classed as a ‘taboo’ topic – something that is just too awkward, too risqué, too embarrassing, or too uncomfortable to be discussed out loud. 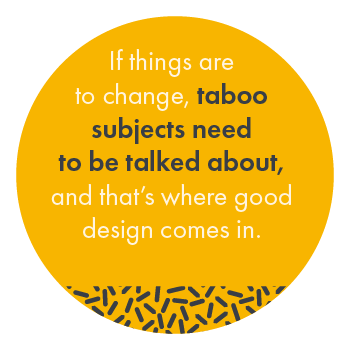 In reality though, many of these issues are things that need to be shared and that deserve the air time – especially when it comes to matters of physical and mental health. While they may be regarded as difficult conversations for anyone the core issue directly impacts upon, making sure the channels of communication are open is really important.

Because, if taboos are to be addressed and things are to change, they need to be talked about!

And that’s where good design comes in.

One of the ways to tackle taboos head-on is to make them visible and to start a dialogue around them. A well thought through and presented campaign can send some of the barriers crashing down and in recent years, we’ve been witnessing this more and more, through everything from brand, to content and creatives.

Here are just a few examples:

The #MeToo movement against sexual assault and sexual harassment was started around a decade ago, but it wasn’t until recently that it truly exploded onto the global stage. This surge followed a string of allegations against US producer Harvey Weinstein, with many high profile female figures coming forward to talk about what had happened to them. According to actor Rose McGowan, one of the most prominent figures of the #MeToo movement, its impact can be seen everywhere, with people now speaking up where ever she goes.

Did you know it wasn’t until 2017 that a UK advert for sanitary towels first depicted menstrual blood? The #BloodNormal campaign by Bodyform used realistic red liquid instead of the infamous blue liquid in the ad. It has since gone on to win numerous industry awards. For Bodyform the campaign was needed, as they believe a large part of the stigma around periods comes from the fact there are no positive representations of them in mainstream culture.

Impactful campaigns can be started by anyone, anywhere. Women from all over the world signed up to the first ever Januhairy, which encourages women to ditch the razor and let their hair grow naturally. The idea was started by a University student who posted on Instagram saying she hopes to raise awareness and promote messaging surrounding positive body image. 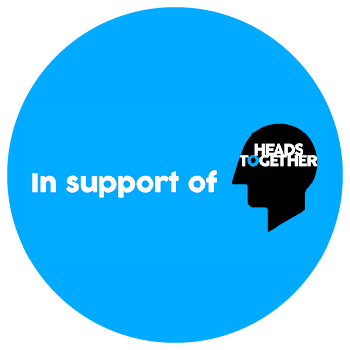 Another highly visible campaign from the past year is Heads Together, an initiative spearheaded by The Duke and Duchess of Cambridge and The Duke and Duchess of Sussex. It aims to tackle the stigma associated with mental health. An admission by Prince Harry that he sought counselling for his own mental health has spurred on many other people to share their experiences too. All of which has encouraged conversations and also made businesses address how they might better handle the issue in the workplace.

Sexual health is another one of those topics that just doesn’t get talked about as much as it should. When the team here at Alive was asked to help with a campaign around sexual health, we jumped at the chance.

Lothian NHS wanted to promote a free online condom postal service, available to 16-24-year olds living in Edinburgh and the Lothians. They wanted to encourage young people to use the service, but without using scare tactics around unwanted pregnancies and STDs.

For the target audience and taboo subject matter, animation was a natural choice, and our design team came up with the character of ‘Willy’ – a penis who is off for a hot date! He can be seen running through Edinburgh in a sequence reminiscent of an iconic scene from the film Trainspotting, before ordering some free condoms from the service on his phone.

The whole team loved the challenge and to be doing something a bit different to help promote the service. We especially loved that the client was so open to creativity in taking their messages out there, which was exactly what was needed for the target audience.

So, what’s the secret to creating a successful campaign for a taboo subject?

One thing is for sure, the host of new communications channels we now have at our fingertips has created many more opportunities when it comes to tackling taboo subjects. There are now limitless ways to reach a target audience and get a conversation started, which is great! As when it comes to battling those taboos, it’s always good to talk.