What a chicken crisis can teach us about language

Chickens and communication don’t usually have a lot in common. But in recent weeks the KFC comms team has given a masterclass in how language can turn a crisis into an opportunity.…

I don’t know about you, but I wouldn’t have fancied being a member of the KFC procurement team in recent weeks. After awarding DHL the contract, over their existing supplier, to deliver chicken to their restaurants up and down the country, it turned out DHL were ill-equipped to meet their end of the bargain. Cue closed restaurants, upset customers and an endless stream of chicken puns.

However, the communications team saw an opportunity to shine apologising to and updating customers using some excellent word play, open and honest language and a sense of humour that has seen them keep their reputation intact. 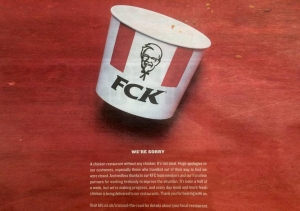 It would have been easy to run around like headless chickens, but instead they kept a cool head and responded in a way that was funny, sincere and most importantly human.

KFC has demonstrated just how important language is to a campaign, yet it can so often be an afterthought, especially internally. The focus is on the big idea, the visuals, the stakeholder buy in, that by the time internal comms are invited to sprinkle their lexical magic, the clock is ticking and it all becomes a bit rushed.

Our colleagues will often assume writing content is simple, quick and not particularly strategic. But before they start counting their chickens, you might want to remind them there’s actually quite a lot to consider…

Stick to your tone 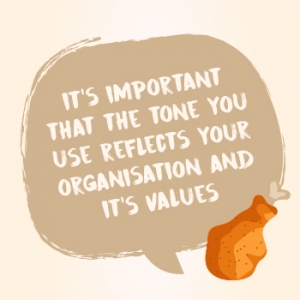 Campaigns are an opportunity to unleash your creativity.

However, you’re still communicating with the same audience so deviating from your established tone of voice could jar. It’s important a campaign still reflects your organisation and its values – imagine if an insurance company that used a more conservative tone of voice suddenly started speaking to its employees in the style of Innocent Drinks.

It would be confusing and lack authenticity, which would ultimately undermine the key message of the campaign and any trust that had previously established.

However, it doesn’t mean you can’t be creative, it just means you’ll have to be even more creative to think about how you bring the topic to life within the parameters of your brand and tone.

Campaigns need to be impactful, memorable and inspire action. Check you’re using an active voice – it’s how we speak so it sounds natural and tends to be punchier than the passive voice which can sound very formal.

Think about how the verbs you use can conjure up different images – is it an improvement or a transformation? Is it good or is it exceptional? Tweaking one small word can change the whole meaning of the sentence. But a word of warning – descriptive language can bring a campaign to life, but don’t change the verb at the expense of accuracy. If it’s a small amendment, describing it as a transformation will be misleading and could damage your credibility.

Focus on the positives 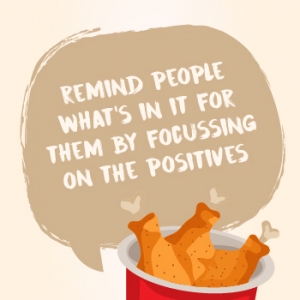 While many of the campaigns you’re involved in will be fun and exciting, there’ll be times when the topic is dry and you’re asking people to do something, they don’t want to. Think information security or the General Data Protection Regulation (GDPR). It’s easy to focus on the negatives – what people must not do, and the severe consequences of said actions.

But if you want to see a whole organisation turn into ostriches, burying their heads in the sand in fear, roll out a GDPR campaign and litter it with words like ‘regulation’, ‘rules’ ‘consequences’ ‘fines’ ‘compliance’. Words that are unlikely to inspire the right type of behaviour.

But it’s easy to slip into that sort of language because those elements are important. But what about if you used words like ‘opportunity’ ‘safer’ ‘everyone’ and highlighted the benefits to all of us of having our data more secure?

Even the dullest sounding campaigns can be engaging if you focus on the positives and remind people what’s in it for them.

We have an extensive and rich vocabulary with so many words to choose from. Yet, so often in the world of business we choose words that individually everyone understands but when strung together suddenly become meaningless – ‘square the circle’, ‘boil the ocean’, ‘move the needle’, ‘get your ducks in a row’, the list goes on.

Use plain English, say what you mean, especially if not everyone in your organisation speaks English as a first language – keeping it simple helps them to feel included.

That’s not to say you can’t have fun or be smart with the language you use as long as everyone can understand it.

Give them a nudge 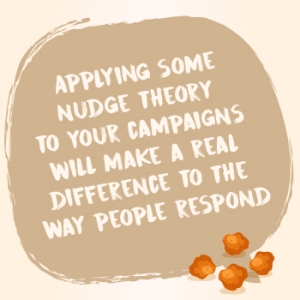 Nudge theory has become popular in many areas from politics to business and is about ‘nudging’ people to make a positive choice. And choice being the operative word – nudging is not about manipulation but encouragement while still providing choice.

For example, if you wanted to encourage healthy eating, putting fruit and veg at eye level, and junk food below encourages the healthy option, but people can still choose either.

In an internal communication context, you can word content in ways that encourage certain behaviours. If, for example, you’re running a campaign about asking people to update their personal information to inform your diversity and inclusion agenda, you might want to apply some nudge theory. For example:

If you haven’t updated your personal information yet, you have until 10 March.

There’s nothing wrong with this, but it’s not providing any real call to action.

What if you said: A huge thank you to everyone who updated their personal information. For those of you that haven’t, there’s still time!

Now people might be thinking, if my colleagues are doing it, it must be a good thing and I don’t want to be one the only one who doesn’t.

You could also try: Only a couple of days left to update your personal information – don’t miss your chance to help shape our diversity and inclusion programme.

This option has created a sense of urgency and is helping people to remember there’s a bigger picture to what you’re asking them to do.

Applying a bit of nudge theory to your campaigns could make a real difference to the way people engage and respond.

Who would have thought a chicken crisis could provide a valuable lesson in language? But do take a drumstick out of KFC’s bucket and spend time thinking about what you’re saying and how you’re saying it – it could just make or break your campaign.