Perfect timing: harnessing the power of ‘when’

“You don’t have to swing hard to hit a home run,” said the legendary baseball star Yogi Berra. “If you got the timing, it’ll go.”

We may not be hitting baseballs, but the analogy holds for communicators too.

Timing can help us get the most out of our day. But it can have a surprising and unexpected impact on people’s behaviour over longer timeframes as well. Understanding how we can help improve our performance and make our communication campaigns more effective.

Here are six weird and wonderful ways to harness the power of ‘when’ to get better results.

Time your campaigns for maximum impact 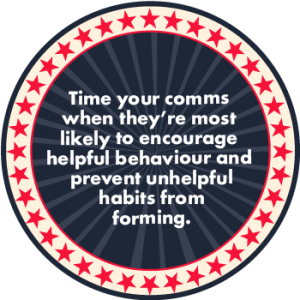 Timing is a key part of nudge theory and the Government Behavioural Insights Team’s E.A.S.T formula. As David Halpern writes in ‘Inside the Nudge Unit’, we are more likely to change our behaviour at some times than others, so timing is crucial.

The best approach is to get in early, timing your communications when they’re most likely to encourage helpful behaviour and prevent unhelpful habits from forming.

For example, when Sainsbury’s adopted smart working at its head office in London, their comms approach targeted colleagues before they moved to their refurbished floor. Simple tips – like ‘no camping’, ‘travel light’ and ‘feel free to roam’ – promoted the right behaviours from the start, minimising the effort needed to break bad habits later.

Of course, it’s not always possible to intervene before habits form – and we all know established behaviours can be hard to change. But science shows we’re more likely to be effective if we plan our communications for certain times rather than others.

It’s no surprise, for example, that searches for the word ‘diet’ soar by around 80% on January 1st. But they also spike at the start of every month and week. A similar pattern can be found in gym visits: days that represent ‘fresh starts’ appear to increase our motivation.

So if you’re planning a behaviour change campaign, launch it on a ‘fresh start’ day.

Consider imposing a deadline even if there isn’t one

As communicators we often need people to take action by a certain deadline, but that’s not always the case.

Take payroll giving, for example. We want to increase the number of colleagues who sign up, but there’s no limit to when they can do so. In cases like this, research suggests that a deadline can stir people into action even when one isn’t strictly necessary.

Useful as deadlines can be, there are limitations, as Dan Pink observes in When. Time limits for creative tasks can sometimes reduce motivation and flatten creativity, while deadlines for delicate negotiations may speed a resolution – but not necessarily the best one.

Use the Zeigarnik effect

In 1927, psychologist Bluma Zeigarnik noticed that while a coffeehouse waiter flawlessly remembered her party’s drinksorders during their visit, he had forgotten them almost as soon as they left.

This has become known as the Zeigarnik Effect: our brains work with ‘open’ and ‘closed’ files, and are twice as likely to remember information in files we deem ‘open’.

We can take advantage of this by ‘opening files’ on a subject early. For example, if you know you have a creative project coming up, try to ‘open the file’ on it with some initial thinking or brainstorming. Having opened the file, your subconscious will work on it while you tackle other tasks, giving you a flying start when you’re ready to give it more attention.

In a 1955 Economist article, C Northcote Parkinson observed that ‘work expands so as to fit the time available for its completion’.

It’s a phenomenon played out in workplaces around the world, not least in that bear pit of potential time wastage: the meeting. Schedule an hour for updates from the team, and it’s likely they’ll last an hour – even though the content may warrant only 20 minutes.

So plan meetings and tasks tightly, and keep strictly to agenda timings. Try standing meetings to keep people focused, or circulate all pre-reading in advance so time isn’t wasted on unnecessary updates.

Timing can play a surprising role in your team’s perception of you as a leader.

Studies by sociologist Duncan Watts suggest email response time is the single best predictor of whether employees are satisfied with their boss. The longer it takes a boss to respond to their e-mails, the less satisfied people are with them.

So if you want a simple way to be perceived as a better manager, answer emails from your team promptly.

Don’t have a team? It’s a safe bet your colleagues will appreciate your speedy responses too. 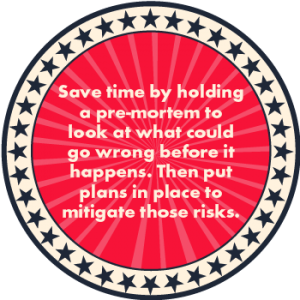 When embarking on a major project like a change programme, a positive start is crucial. So how can you get off on the right foot, build momentum quickly and avoid pitfalls further down the line?

In When, Daniel Pink suggests conducting a pre-mortem, the brainchild of psychologist Gary Klein. While coroners conduct post-mortems to discover cause of death after the event, pre-mortems look at what could go wrong before it happens.

At the start of your project, encourage your team to project themselves into the future and imagine it’s been a complete disaster. What’s gone wrong, and why? By clearly identifying the risks in advance, you can put plans in place to mitigate them, and make sure you get off to a flying start.

Imagine you’re behind at the midpoint

Hitting the midpoint of a project can have two effects. It can subdue our interest and stall progress, or stimulate us to push ahead with renewed vigour. Pink calls this the ‘slump’ and the ‘spark’. How do we make sure it’s the latter?

Research shows that believing you’re slightly behind at the midpoint of a project can spark motivation and significantly increase performance in the second half of the task.

So when you reach the midpoint of a project – or even the week, month or year – imagine you’re behind where you need to be. But only by a little.

Understanding the science of timing can give us the insight we need to boost our campaigns and give our performance an edge. So harness the power of ‘when’ – and hit your own metaphorical ‘home run’.