Surfing the winds of change

While the Scorpions yearned for the wind of change in their classic Cold War anthem, our own experience of communicating change can be quite different.

In reality, that wind of change can feel more like a hurricane, with employees resolutely braced against its impact.

As communicators, our role is to help people sail with the tide rather than against it. But it’s not easy. According to one study, around 70% of business change fails.

So how do we help colleagues dive into the waves and come out the other side? These tactics can help…

Every change means the ending of something, and a potential sense of loss.

As a communicator, it’s important to understand what people feel they’re losing. You can then acknowledge it, and allow them a sense of closure.

Russell Grossman, now Director of Communications at the Office of Rail and Road, once gave a great example from his time as Head of Internal Communications at the BBC. When popular Chairman Greg Dyke was abruptly sacked, Russell called an all staff meeting. Its purpose? To give people the chance to air their sadness and share their sense of loss – an important step before they were able to move on.

Bring your change vision to life 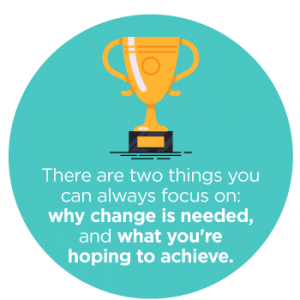 Communicating change can be especially difficult at the start. At a time when people are hungry for information, there’s often little to communicate.

But there are two things you can always focus on: why change is needed, and what you’re hoping to achieve.

Create a simple but persuasive change narrative to outline your story. Change guru John Kotter advises making this as visual as possible, so use images, videos, analogies or demonstrations to bring it to life. Then keep coming back to this narrative as the change progresses.

It’s important to bear two things in mind. First, be honest. Leaders can sometimes gloss over potential drawbacks in change programmes. But research by influence expert Robert Cialdini shows that being open about these up front makes your vision far more credible.

Second, when making your case for change, don’t criticise what’s gone before – it may not go down well with the people who contributed to it. Instead, focus on the changing circumstances, and the need to build on what has gone before.

At the start of any change it’s unlikely you’ll know exactly how it will affect your audience. So setting up effective channels for regular feedback is key to keeping your change on track.

Internal social channels such as Yammer are great tools for this. Over time, they’ll also help you identify your change champions and advocates.

But nothing beats sitting down with colleagues face-to-face, whether through listening groups or a more formal network group.

This gives you essential insight into issues and concerns that you can address in your communications. It also helps colleagues buy into the change process.

When Sainsbury’s introduced activity-based working at its Head Office, colleagues were moved from fixed desks to open, shared workspaces. By soliciting feedback from monthly listening groups and Yammer, the project team were able to constantly modify both the change plan and their communications approach to help colleagues adapt more easily. 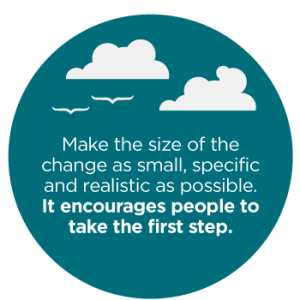 You can’t cross a chasm in two small jumps, as the old saying goes. But when most people don’t want to cross the chasm in the first place, small steps are a sensible strategy.

David Gleicher’s formula for change suggests that creating an ‘acceptable first step’ is key to success. He defines ‘acceptable’ as small and likely to be effective, or easily reversible if it proves unsuccessful.

Chip and Dan Heath, authors of the brilliant book Switch, call this ‘shrinking the change’. If you make the size of the change as small, specific and realistic as possible, it encourages people to take that first step. Those small steps – ‘inch pebbles rather than distant milestones’, say the Heaths, provide quick wins you can share to build momentum.

We are all just ‘bundles of habits’, as the Victorian philosopher William James once said. So if our daily behaviour is largely dictated by habit, how can we take advantage of that?

If you’re trying to bring about behavioural change, encouraging new habits can be an effective way to move towards your goal. But sometimes the habits you need to encourage are not immediately obvious.

When Sainsbury’s moved to activity-based working, colleagues were encouraged to get into the habit of hanging up their coats in the central cloakroom when they arrived. Why? Because listening groups revealed that people who kept their coats on the back of their chair were less inclined to move between spaces. They were also more inclined to use them to ‘save’ space for other colleagues. 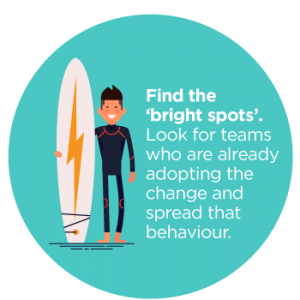 When trying to change behaviour, we tend to ask: ‘Where are we going wrong, and how can we fix it?’ A better option can sometimes be: ‘Where are we succeeding, and why?’

You can then use that insight to grow your change – an approach the Heath brothers call focusing on the ‘bright spots’.

So look for teams who are already adopting the change. What are they doing differently? How can you spread that behaviour?

Services company Sodexo built a successful, long-running change programme to transform its approach to employee engagement. It was a campaign built around bright spots: seeking out great engagement stories from line managers across the business, and sharing them widely to show what a great job looks like.

When President George W Bush prematurely declared ‘mission accomplished’ and the end of the Iraq War in 2003, it came back to haunt him.

Yet organisations make the same mistakes. Lasting change takes longer than we expect. Rather than declaring ‘mission accomplished’ when an initiative’s been launched, we need to keep the momentum going.

Stay focused on your change far longer than you think necessary. Keep finding ways to communicate successes. After all, those winds of change are fickle – they can change direction and knock you over when you least expect them.

Change isn’t easy, but the right approach gives us a far better chance of success. So for your next change project, try out these tactics with your people – and help them surf with the tide, rather than against it.

By Dave Wraith for Alive!