Search for the hero inside yourself: why introverts make great leaders

In business, politics and even sport we are drawn to the more charismatic, the more confident, the more gregarious and outgoing leader. The extravert. We want to be engaged, inspired, brought together and we feel more secure with someone who exudes confidence. Socially it seems to be more acceptable to be an extravert rather than an introvert.

But are we missing a trick by always being drawn to that which we can always see or hear?

There are plenty of examples of successful people who might be seen as introverted – Marissa Mayer, Barack Obama, Rosa Parks, Meryl Streep, Bill Gates, JK Rowling – the list goes on.

When it comes to introversion and leadership there are fewer examples. 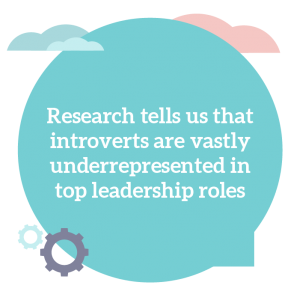 The Myers Briggs Company found, from decades of data and research, that introverts are vastly underrepresented in top leadership roles. In the US, only 39% of top executives and senior leaders reported a preference for introversion and in the UK it was 28%. 9 out of 10 people also reported feeling pressure to behave in an extraverted way.

If they are so underrepresented do introverts make great leaders?

Before we look to answer that question let’s make sure we are all on the same page when it comes to our understating of the terminology.

The cult of personality

The traits of extraversion and introversion are core to a number of human personality theories but it was Carl Jung who popularised the terms. In referring to extroversion and introversion Jung was interested where people got their energy, where they put their attention. He found extraverts were energised by the external world of people and things, where introverts gained their energy from the more internal world of ideas and images.

Nobody is a pure extravert or introvert, in fact if you find it easy to be on both sides of the preferences you might be called an ‘ambivert’.  We dip our toes into our opposites regularly and we should not think of these things as an absolute either or, but more on a sliding scale based on the strength of our preference.

If there are more of them, extraverts must make the better leader?

There is no definitive research to suggest that either an introvert or extravert is more effective than the other when it comes to leadership and as teams are made up of a blend of personalities, introverts should be as successful as extraverts.

There is one study that reported the type of employee that leaders manage can have some impact on whether that leader is more successful than not.

Extraverts tend to be better at leading more reactive employees, those who need more guidance, direction and motivation. Introverted leaders tend to be more effective with employees who take more initiative, work well unsupervised and like to create ideas and make suggestions.

Why introverts DO make great leaders

As introverted leaders are less common it’s not always apparent what they can bring to an organisation. Here are a few things where they have the edge on their extraverted colleagues: 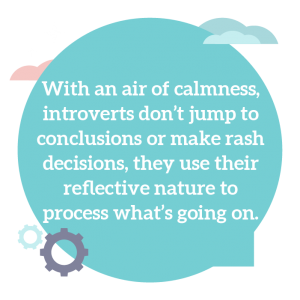 It can seem that our society is engineered in a way that works against introverts but they have unique personality traits than can empower them to become exceptional leaders, if those traits are recognised and harnessed. 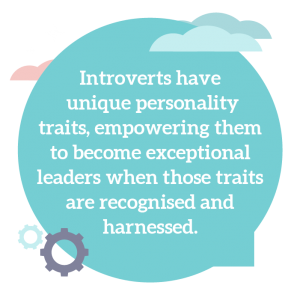 There’s a glut of hugely successful tech giants (Zuckerberg, Bezos, Musk) who are living proof that introversion is not a barrier to success when it comes to leadership. Here are some top tips on how to harness the power of introversion: