In film folklore, it’s rumoured that when the idea for Alien was presented in 1979, it was pitched as Jaws in Space. Apparently, those three words were enough to secure enthusiastic agreement and the evil extraterrestrial was unleashed on the world.…

More often than not, pitching movie ideas is a brutal business. Competition for attention is high, attention spans are low and even the most thrilling ideas sadly sink.

It can be a bit like this in comms, particularly when your idea isn’t a run of the mill concept, you’re unsure quite how to present it and you’re up against Senior Execs’ whose priorities are mounting by the moment.

Fortunately, it is possible to build a winning pitch around your idea that seizes the imagination of your leaders rather than leaving it dead in the water.

Consider these ways to proficiently pitch your great idea to the decision makers in your business:

When you use a metaphor to explain your idea, you use language that your audience can relate to, creating clarity and recognition. ‘It’s like Jaws in Space’ made immediate connections with a film that had already achieved wild box office success and created an instantly recognisable picture without the need for drawn-out explanations. By taking a commonly understood concept and connecting it to your idea, you translate the information into something your audience can comfortably relate to.

As the human brain has evolved it’s developed into three distinct parts and the first of these to develop was the primitive, reptilian part, the croc brain. It primarily focuses on survival and can generate strong emotions like the desire to flee a predator. The midbrain came next which allowed us to understand more complex situations like social interactions and finally the sophisticated neocortex evolved, enabling reasoning and analysis.

Your pitch will be driven by your neocortex but will be received by your target’s primitive croc brain which can dismiss anything new and exciting, creating a potentially bone crushing conclusion. So, if your idea seems a bit too abstract, your target is likely to perceive it as a threat. Oren Klaff, author of Pitch Anything explains that your message should be clear, concrete and focused on the big picture. Ensure that the croc brain sees the idea as something positive and novel which deserves to be passed on to the higher brain structures by keeping it as simple and clear as you can.

In Made to Stick, Chip and Dan Heath explain that any idea can be made to stick if certain principles are applied. ‘Emotions are the driving force behind human behaviour’, so appeal to your audience by focusing on emotional triggers rather than dry facts when presenting an idea. If you’re talking to Senior Execs, consider first what makes them tick, what gets them excited, what approach will drive a positive emotional response and how you can connect that back to your idea.

Approximately two thirds of proposed ideas are rejected – not because they’re poor ideas but simply because they’re delivered badly. Believe it or not, you’ve got just 30 seconds to capture the attention of your decision makers, otherwise their minds drift and they’ll be losing interest and checking their phones before you know it. So start with a concise, compelling statement that makes them want to know more.

In Pitch Perfect: how to say it right the first time, every time, McGowan and Bowman suggest testing out your idea in a low stakes situation first. Choose a minimal-pressure environment, perhaps during a meal out with friends or at home with teenage children, and practice exploring the perfect opener that leaves them wanting more.

Put your target at ease and get them on-board by letting them know that you’ll be keeping things brief. If you’re well prepared and you know what you’re doing, you can pitch anything in under twenty minutes. According to Klaff in Pitch Anything, when Watson and Crick presented their Nobel Prize-winning idea of the DNA helix, they only needed five! 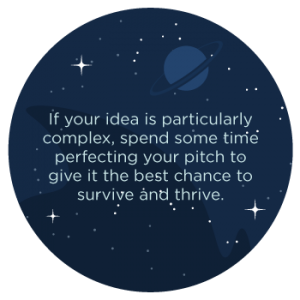 Crucially, when it comes to stickiness, providing too much detail around your idea will be counterproductive. So keep it brief and chop your pitch down to just a few simple statements which will make it easier for your execs to accept.

If your idea is particularly complex or a little peculiar, it’s worth spending some time on your pitch to give it the best chance to survive and thrive. You have the opportunity to design the journey you want to take your target on so that they’ll be biting your hand off when you present it.

So go forth and sink your teeth into your next brilliant idea, knowing that when it comes to pitching it to your higher ups, you’ll know how to make it a hit.

At Alive, we love hearing killer ideas so if there’s something you’d like to chat through or you want a bit of help scripting your pitch then get in touch and we’ll help make it Hollywood.

“Alive with Ideas was able to help transform the visual layout for our RSVP invite into an crisp, vibrant, and eye-catching design. Each time I work with the team, I am always stunned at the effort and creativity that goes into each detail and am always eager for the end result. The team is extremely accommodating and always provide a fresh approach to our projects that elevates our communications materials!”