Discovering the power of your organisational influencers

We are all under the influence. From celebrities, politicians and other high profile public figures, through to the new breed of online influencer, who are amassing millions of followers on sites like Instagram and LinkedIn.

When these people speak, others sit up and take notice. And the more respected and trusted they are, the more powerful their words and actions prove to be.

But it’s not just in our personal lives that these forces are at work. Organisational influencers can be just as impactful on their followers – other employees who value and trust their opinions.

The connection they have with those around them, which may at first glance seem insignificant, can actually have huge implications for an organisation and its culture. Therefore, being in the know about who these individuals are and thinking about ways to tap into their connections, is an important chapter in the IC playbook.

What is an organisational influencer? 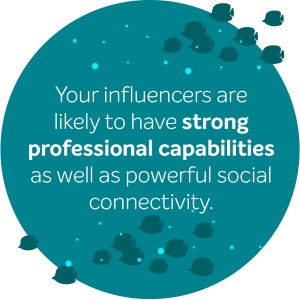 In a nutshell, an organisational influencer is someone whose opinion and advice are respected and valued by those within the workplace environment. They will often have strong professional capabilities, but also social connectivity.

What often surprises senior teams is to find out who these key influencers are, as their assumptions tend to be wrong.

For example, being in a position of power does not automatically mean you have influence – or even that your opinion is respected! According to McKinsey, influencer patterns almost never follow the organisational chart.

Why do you need them on side?

Understanding employee influencers and getting them on side is important, as it can have a significant impact on organisational performance. They are called an influencer for a reason. Their opinions matter and they can be a huge power for the positive – but also for the negative.

If they are engaged with and support an initiative you are trying to introduce, then that could be a gamechanger for how successful it ends up being. Harnessing their energy could help drive through change programmes, improve engagement and overall bolster communication.

Imagine for a second this scenario… 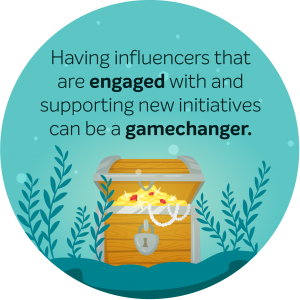 You intend to implement a new process that everyone in the organisation will need to adhere to. When you share this information, you send a communication out to all your employees, explaining what is happening and why. You may back this up with a full team meeting.

The grapevines have now gone into overdrive and many employees are turning to someone they trust (an influencer) for an authentic viewpoint on what it will mean for them in reality.

Depending on the response they get, the way your news is received could be very different. And that comes down to how you plan and implement the process, regarding both your communications and the role that influencers will play.

If they are not in full support, then negativity can quickly spread. The full extent of the damage may be hidden below the surface, but it could see your efforts sabotaged. The result being that you hit a lot of resistance moving forward.

How do you find them?

The first step to leveraging influencers is to understand who they are. And as we’ve mentioned, senior teams often look in the wrong places, so never assume you know!

So, now you know who they are, what should you do with that information?

The key is to consider your employee influencers early in the process. They need to understand and be engaged with an initiative, before you attempt to introduce it.

Here are 7 quickfire ways for getting them on side: 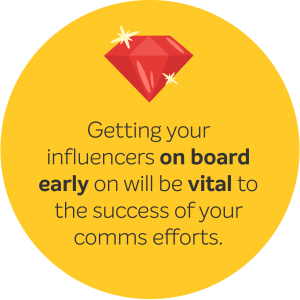 One of the major benefits of working closely with influencers, is that it helps improve the flow of communication in both directions. They should not be seen as an issue that needs to be managed, or just a channel that can be capitalised on, but rather as a powerful step along the way to building a stronger, more aligned culture.