Meet the team that brings us Alive – Laura

When Laura, a Senior Designer here at Alive, was asked to give a talk to some university students, we all got a little bit excited. We listened to the amazing things she had to say and were hooked!

From finding out where her love for design first came from, to what it was like working in the crazy world of live television news, we were inspired to find out more.

Here’s what she had to say, when we put in her in the hot seat.

When did you first decide you wanted to be a designer? 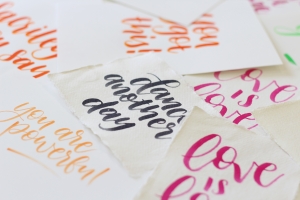 I have to admit, I just kind of fell into it. I’ve always been quite creative and a visual person. I love hand drawing and ended up doing A level art, then going on to a foundation course being studying Graphic Design at Portsmouth.

In my first year at uni, I still didn’t really understand what design was – what it meant, how it was used and why everyone was so passionate about it. It wasn’t until mid-way through my 2nd year that I finally got it. I started to get excited about how different methods of design could tell stories and make boring data sets understandable and exciting. From then on, I was in love!

What was your first design job?

When I graduated, I exhibited my final piece at a ‘New Designers’ fair. It was spotted by someone from Sky News, who asked me to go in for an interview. I was quite confused about why Sky News wanted to interview me for a junior motion design position, but I went along any way, just for fun.

It ended up being the most intense interview I’ve ever had! A whole day alongside eight other candidates who had all done motion design at university. I didn’t think I stood a chance, but to my amazement they offered me the job.

On my first day, when I confessed that I didn’t really know how I got there, my new boss said: “You can always learn programmes, but it’s hard to find someone who really knows the foundations of design and gets how to use it”. That comment has stayed with me ever since.

What kind of projects did you work on for Sky?

At Sky, I learnt how to switch my brain from static design to motion design. It was my job to work out a way to guide the viewer through the story and data, in a way that kept them engaged. It was like being in another world and I was working on so many interesting projects.

‘The Spending Review’ was a standout project for me, as it gave me an opportunity to work with interactive information design and live data. Budget cuts (and financial stories in general) are generally very confusing. I needed to create something that would be understandable for everybody. As a team we simplify everything and let the information be the star of the show. What we ended up creating was a wall sequence that was controlled by the presenter.

When did you join Alive?

After a number of years with Sky – and as much as I loved working there – the corporate way of life just wasn’t for me. The nights shifts, the endless pressure and restrictive corporate environment was taking its toll. My work -life balance was non-existent, so I decided it was time to look at my options.

I wanted to work somewhere I could grow and develop as a designer and when I came across Alive, I had a warm and fuzzy feeling. I instantly felt it would be a great fit for me and I ended up joining the company in February 2017, with a remit to help lead on the motion side of things. I immediately felt at home.

I find it really rewarding that I get to work closely with clients to bring their briefs and messaging to life. They are always very thankful too, which is something that didn’t happen in news!

I’ve had the chance to work with so many different brands now, which has really enabled me to develop as a designer and has also pushed my motion design expertise into different areas, including character animation, which I absolutely adore.

Working at Alive has really helped me find my playful side too and I have a great work-life balance now. Yay!

What kind of projects have you worked on?

One of my favourite projects to date was for a free condoms campaign being launched by the NHS in Scotland. The final design we came up with, centred on a willy running down Princess Street in Edinburgh, trying to find a condom. The image was reminiscent of a famous scene in the film Trainspotting and it is definitely attention grabbing! 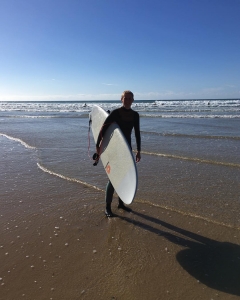 I also get to do a lot of illustration and hand lettering, rather than using stock illustrations. I’ve always loved doing hand lettering. It’s so organic and free flowing and is something I still spend a lot of my spare time doing too. It’s been amazing to see my lettering and illustrations used on walls within client offices and other branded environments. Something that just wouldn’t happen if I didn’t have the great bosses I have at Alive.

Finally, tell us something we’d never guess about you?

Hmm…..I may not live near the sea but I love surfing and get in the water every chance I get!