The ability for people to differentiate between urgent and important is difficult at the best of times, but in the run up to Christmas, all rational thinking goes out the window……

How many times have you been asked to do ‘some comms’ and the deadline was yesterday? You’ve probably lost count, and in the lead up to Christmas, people get into a particular frenzy about getting stuff done before the holidays. So how do we as IC pros help people understand the difference between urgent and important?

Saying it doesn’t make it so 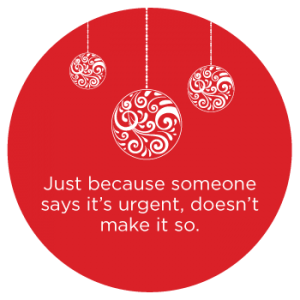 Help people to understand that important and urgent aren’t necessarily interchangeable words. If something is genuinely important, where time allows, proper thought and planning should be given to it to ensure it lands well and achieves its objectives.

Sometimes it will be both important and urgent, but it’s easy to get carried away on a tide of panic especially when the demands are coming from the powers that be. Even as comms pros, we sometimes need to stop, consider and challenge. Just because someone says it’s urgent, doesn’t make it so.

Why? Such a simple but effective question (just ask Simon Sinek). If someone tells you something is urgent, chances are they mean it’s important. And asking someone why it needs to go tomorrow, not only stops them in their tracks but can help you understand where they’re coming from. Rather than see your colleague as a headless chicken running between a million urgent tasks, you may see someone under immense pressure from a boss to deliver.

If it isn’t actually urgent, give them solid explanation to go back to their stakeholder with – help them articulate the benefits of giving this a bit more thought and the wider context that the stakeholder might not have considered. It’s an opportunity to build trusted relationships and demonstrate our ability to think strategically.

Whip out your plan

Any IC pro worth their salt has a plan, and while you can’t anticipate everything, anything that hasn’t been scheduled needs to earn its place. How does it align with what else is going out that week or month? It’s all very well communicating an ‘urgent’ message about completing time sheets before the end of the year but if it clashes with the Christmas party invite, it may well get lost.

Having a plan not only gives you credibility, but confidence to challenge as you have evidence to back up your argument.

How urgent is urgent?

There are varying levels of urgency – the building’s on fire requires immediate comms for example. However, it’s not unheard of for companies to announce something like redundancies in the lead up to Christmas. This type of news is important and depending on the situation, it can’t always wait.

Key attributes of an internal communicator are empathy and the ability to see the wider picture. So, it’s worth reminding your colleagues that most people only take one week off over Christmas, and asking if the announcement can wait until January. It’s never good news to hear, but the week before Christmas is particularly cruel.

Consider how urgent is urgent, before rushing into a communication that has a very real impact on people’s lives.

There’s something about this time of year, when everyone is desperate to wrap everything up before Christmas with a nice bow (pun fully intended).

Yet it’s also when everyone is starting to switch off and spend most of their time worrying about finishing their Christmas shopping or what they said to their boss while drunk at the Christmas party.

In amongst the festive fun, don’t forget to consider your audience.

If it really is important and you want their full attention, communicating the week before Christmas is unadvisable.

Make 2018 the year of prioritising

He refers to the Eisenhower Method which categorises tasks into four quadrants:

Using a tool like this can help us, and others, to prioritise in the most efficient way. And as we saw earlier with the comms plan, backing up what we do with recognised models and methods, give us a stronger foundation to challenge and reinforces our credibility.

So, let’s make 2018 the year we prioritise prioritisation and ensure IC pros are leading the way in effective communication.

Hopefully you’re now reassessing your to-do list and breathing a sigh of relief that the lead up to Christmas doesn’t have to be as frantic as you thought.

We’ll be trying to take our own advice here at Alive, so all that’s left to do is wish you all a very Merry Christmas and to thank you for reading, liking and sharing our posts throughout 2017.

We’re looking forward to seeing what comms adventures 2018 brings our way – see you next year!