Investigating the Role of the Trusted Adviser – Alice & Luther Style

In this article, I’ll share some key points about the role of trusted adviser, through the epic experiences and lively storylines of the brilliant character, Alice Morgan from the hit BBC crime series, Luther.

The Alice and Luther story

Alice Morgan is an Oxford-educated psychopathic genius who is above such tedious concepts as justice and the law.

Detective Chief Inspector John Luther is a brooding London copper with a tendency to bring violence and destruction wherever he goes.

The Alice / Luther dynamic is a pivotal part of the drama, and the way the relationship develops between the two is gripping, captivating and ingenious as Alice becomes part of Luther’s life.

The story begins when, due to lack of evidence he can use in court, Luther fails to arrest Morgan, who callously murders her own parents and the family dog in the very first episode. For the rest of the show she becomes his personal confidante, stepping in when the going gets tough and advising Luther on a number of serious crime cases.

Now bear with me.

I’m aware that these characters bear little semblance to your average internal communications professional and a typical CEO – hopefully. However…

Following an initially rocky period, the relationship between the two develops into something rather special. In much the same way as Alice does, a trusted adviser will start off by providing specific technical support or answers, then focusing on wider problems before becoming progressively more concerned with the individual’s own needs. Lessons can be learned about how Alice gradually and cleverly positions herself as Luther’s trusted adviser. It’s tough to employ advisory skills without first getting someone to trust you enough to share their problems with you, personal or professional, and Alice achieves this beautifully. 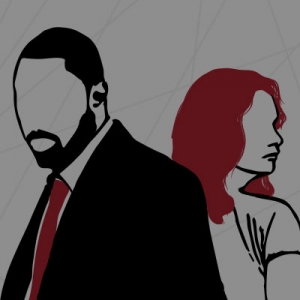 So what are some of the common traits of a trusted adviser? What characteristics will help us to maintain such a position? And how does the extraordinary Alice Morgan portray them, admittedly in occasionally misguided ways?

– HAVE AN INTEREST IN WHAT MATTERS TO THE BOSS, KNOW THEM AS AN INDIVIDUAL – A trusted adviser will take every opportunity to deliver what’s needed from a personal perspective, knowing their interests outside of work, what makes them tick and what pushes their buttons in order to fully justify their trusted position and their ‘seat at the table’. Perhaps Alice was a little over zealous with her attempts to ‘support’ by taking Luther’s wife hostage or murdering his archenemy Henry Madsden, but the point still stands.

– BE A ‘SAFE HAVEN FOR HARD ISSUES’ – When a trusted adviser has truly earned their place, they will have evolved through the various stages of the process and arrived in a place where they are turned to at the most challenging of times. Luther experiences his fair share of tough times, difficult decisions to face and moments where the answers seem a million miles away. And where does he turn? To Alice, of course!

– HELP TO SEE THINGS FROM FRESH PERSPECTIVES – As a trusted adviser, helping others to see thing from a different perspective, offering solutions and new ideas, enables them to look at situations with a fresh pair of eyes. This is crucial as it helps others to raise their own awareness and enables them to find better solutions. Luther and Alice share many conversations where she talks him through difficult situations and helps him to see things from a different side. On several occasions she shares that golden piece of advice and encourages Luther to ‘change the state of play,’ as she provides him with a unique insight into the criminal mind.

– BE TRUSTWORTHY – This should go without saying, but the key to being a successful trusted adviser is the ability to earn trust and gain confidence. Alice even performs the Brownies Honour salute to prove her allegiance.

– BE ON THEIR SIDE AND HAVE THEIR BEST INTERESTS AT HEART – A trusted adviser possesses the curiosity and quiet self-assurance that allows them to focus their priorities on others. They place a higher value on maintaining and preserving the relationship itself than on the outcomes of any given situation. Alice puts her own welfare on the line by holding up a police car to steal a gun that would implicate Luther in a murder he didn’t commit. Now that certainly proves dedication!

– HELP THEM TO THINK THINGS THROUGH – The trusted adviser acts as a sounding board and mentor, giving good counsel and provides a platform where ideas can be sparked. After much soul searching and a lot of convincing, Alice helps Luther to plan a revenge attack on his ex friend and corrupt police officer, Ian Reed in order to clear his own name. Admittedly, that’s extreme.

– BE PRESENT AT THE MOMENT OF PRACTICAL NEED – The trusted adviser is turned to when issues first arise, often in times of great urgency such as a major change or sudden crisis. Donning a gas mask, Alice bravely steps in to free Luther from police custody after he is wrongly accused of arranging for DS Ripley to be murdered by a vigilante killer. Here she demonstrates her ability to be present and relied upon at the precise moment the need occurs.

– KNOW HOW TO INFLUENCE – In an article by Melcrum, they highlight one of the ways the IC leader is generating more power. Forget hierarchy – focus on influence. ‘Be a trusted adviser not only to senior executives, but to employees as well. Consider yourself their sponsor and enabler – your role is to nurture and nourish these future leaders.’ Alice manages to influence other key characters, like Mark North, the new love interest of Luther’s ex-wife, gaining his trust (despite having previously broken into his home, threatened him and had him beaten by a gang of school girls).

– BE PREPARED TO GET YOUR HANDS DIRTY – We’ve heard many stories of the lengths a trusted adviser will go to in order to fiercely protect the integrity, reputation and ‘executiveness’ of an organisational leader. By ‘taking out’ Madsden and Reed and stepping into other hairy situations, Alice proves that she’ll get involved in every aspect of the job, including the ugly parts.

– POSSESS INTELLIGENCE – As well as a good degree of common sense, the trusted adviser will tend to have a decent level of education and show a commitment towards professional development. Alice was a child prodigy who enrolled in Oxford University at age 13. She received her Ph.D. in Astrophysics at age 18 for her study of dark matter distribution in disc galaxies and subsequently becomes a research scientist. Perhaps that’s stretching it a little.

– HAVE A SENSE OF HUMOUR TO DIFFUSE TENSIONS IN TOUGH SITUATIONS – As well as being entirely professional, being a trusted adviser will also involve a great degree of empathy and an ability to show a personal, human side. This should be reflected in the ability to lighten the mood appropriately during moments of pressure or tension. Having just escaped from prison and turning up on Luther’s doorstep, Alice does a brilliant impersonation of The Road Runner, “meep meep” to help lighten the mood.

– BE IN IT FOR THE LONG HAUL – Trust takes time to grow. It doesn’t happen without a good degree of effort and commitment, it results from accumulated experiences, over time. It’s evident that Alice is totally dedicated to Luther and to being his support for the foreseeable future. However long that may be… (no storylines shall be given away in the writing of this post.)

Despite Alice’s somewhat skewed interpretation of the role of friend, ally and confidante, there are many connections that can be drawn between her relationship with Luther and the position of trusted adviser, particularly if we view it with an open mind! Being a huge fan of the show, it was great putting this post together and drawing on some of those similarities.

Of course, there are many more skills a trusted adviser should possess than those listed above. What are your thoughts? What are the key attributes of a trusted adviser? What character traits are detrimental when it comes to maintaining a successful relationship? Tweet me @Alivewithideas to share your opinion.