Email is not the enemy

Once upon a time email was the answer to all our problems.

But in recent years we’ve fallen out of love with it, resenting its intrusion into our lives at all hours of the day. So, how can we turn the tide of opinion, and ensure that email reclaims its place as a valuable channel of internal communication?

Seeing your name appear in the CC line of an email that’s completely irrelevant to you, has been known to spark rage in even the most level-headed employee. 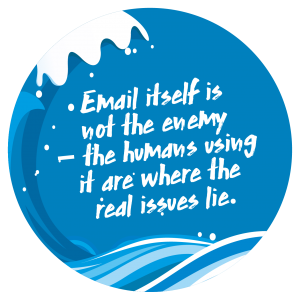 However, email itself is not the enemy – the humans using it are where the real issues lie. Whether it’s emailing the entire global company about the cake in the Derby office or emailing at 10pm in the evening and expecting a response, our behaviour around email has deteriorated and something needs to change.

And while emails sent by individuals is not the responsibility of the internal communication team, we can have an impact on the culture that surrounds that, helping to reduce noise,and ensure the right messages are cutting through.

There are many reasons why people are demonstrating the wrong behaviours around email, so let’s take a closer look at what they are, and how internal communicators can help…

Define the purpose of all your channels

Have you defined, and then communicated, the purpose of your various channels and how and when to use them?

We’re so busy communicating for everyone one else, that it’s easy to forget to communicate how we communicate. So, people might be using email as their default, because they don’t know what the right way to communicate is. 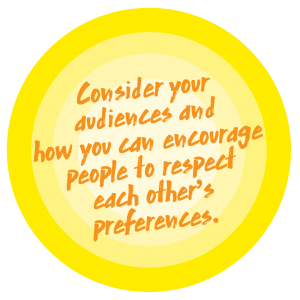 Consider running a small campaign to raise awareness of your various channels and their purpose. Be sure to document that in a place that’s easily accessible to everyone – people are time poor, so if they have to hunt for an obscure page on the intranet that lists all the channels, they’re unlikely to do it.

But remember a one-off campaign won’t be enough, you’ll need to constantly reinforce the right behaviours. If you see someone sending a mass email that should have been an intranet article, contact them and explain how their success story could have had a much bigger impact on a different channel.

Ways of working are changing, and organisations are starting to realise that a traditional 9-5 doesn’t suit the fast-paced, complicated world we all live in. However, when everyone is working different hours, it can lead to emails being sent at all times of the day and night. Which is fine, as long as the recipient is clear on what’s expected of them.

It’s quite common now to see out of offices where people have a sentence in their email signature, saying that due to their working hours, they may send emails after 5pm but that no reply is expected out of the recipient’s working hours.

What a great message that reflects the world we live in and that we all need to work in slightly different ways. It’s respectful of each other and encourages a positive behaviour.

Rather than communicating hard and fast rules about email, consider your different audiences and how you can encourage people to respect each other’s preferences.

It’s one thing sharing the correct behaviours and asking people to abide by them, but if leadership aren’tfollowing those behaviours, things are unlikely to change.

If you’re communicating that email shouldn’t be sent after 6pm because that suits the culture of your organisation, then leaders need to be the first people to implement this – not just not sending email, but also not replying to emails they receive after this time.

Whether or not a reply is expected, leadership need to understand the power and influence they have – people could feel very uncomfortable about not replying to an email from a senior leader until the morning.

Replying to an email can seem like a small, inconsequential action, but it’s important we help leaders understand the role they play and the wider impact it has when the wrong behaviours are demonstrated.

Nudge theory can be a great way of encouraging people to change their behaviour – as long as it’s done ethically. As humans we are very influenced by the behaviour of others. An example in the book, Inside the Nudge Unit by David Halpern, is that if a person is standing next to a bin and has a piece of litter in their hand, they are still more likely to drop it on the floor if they see that others have done the same.

In 2014, the Behavioural Insights Team a.k.a The Nudge Unit, created the EAST model which explains that to persuade people to do something different, you need to make it:

When it comes to the right email behaviours, there’s a number of ways you could do this. 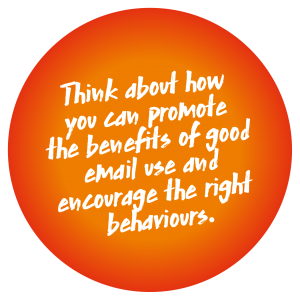 You could make it easy for others to reach the right people, by reviewing your email distribution lists and checking they’re up to date and reflect the various audiences.

You can make it attractive to people by promoting the benefits of good email use to them in a campaign. You could trial good email etiquette with a small group of people, track how much time they save and then share that figure as a headline in your campaign to attract people’s attention.

The social aspect is seeing colleagues demonstrate the right behaviours, whether that’s leaders as per my previous point, or by appointing champions to lead the way in their teams, and even the IC team itself. Start small and build momentum – the more people see it becoming the norm, the more likely they are to follow suit.

And finally – keep it timely. If you work in an organisationwhere you have periods of peak email, don’t run a campaign about email etiquette during it. It will be too late as people will be busy and already deep into bad email habits. You want to reach people just before so that they start with the right mindset and are more likely to implement the right behaviours.

Talking about email can feel very tactical. But it comes up time and time again in focus groups and surveys as both the most used channel and the most irritating channel. Whether you like it or not, email has a strong association with internal communication, so if we can fix the underlying issues, it will be much easier to get our organisations and colleagues to listen to us about the more strategic areas we want to be working in.

So, let’s give email a second chance and remind ourselves why we fell in love with it in the first place.