How do you identify your Changeimals?

Hatchimals were last year’s must-have toy. By changing the Hatchimal’s environment – its egg – an animal hatches from within. In times of change, employees can metaphorically become animals… or Changeimals, as we like to call them.

Here we explore some of those animals, how they react to change and how understanding those reactions can help to shape our strategies.

People are hugely complex. By exploring human behaviour and psychology, and relating it back to your change communications strategy, it can provide depth to your thoughts, plans, and goals.

David Straker, the founder of changingminds.org, came up with the concept of animals metaphorically representing how people react to change.

He called it The Resistance Zoo. 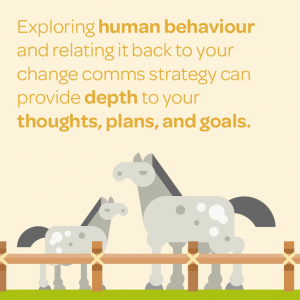 It features six animals that all hatch during times of change… 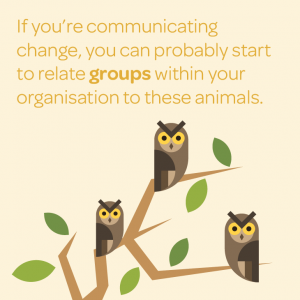 David said that he experienced all of these animals in his change career. If you’re communicating change – and who isn’t? – you can probably start to relate groups within your organisation to these animals.

A bit of fun and a lot of serious

As we’ve travelled on our own change safaris, we’ve come across some animals of our own. Welcome to the Alive additions to The Resistance Zoo…

From the zoo to the workplace

It’s great to use theories and models when you’re hatching your change communications strategy, and having a theological base can give you gravitas when you’re pitching for the buy-in of your stakeholders.

Add to the collection

All experiences of change are different. People react in unique ways, and organisations handle change in their own style.

We’d love to build on our collection of Changeimals.

Who would you add to the zoo?