The challenges of being a creative communicator

At our recent CIPR Inside Ask the Guru event, we brainstormed some of the key blockers to creativity – and how to overcome them…

When you tell someone you’re an internal communicator, there is often an assumption that creativity is as natural to you as breathing. Yet, for those of us whose job it is to always be armed with ideas whenever a creative brief comes flying our way, we know the reality isn’t quite that simple.

Being creative can be exhilarating, frustrating, rewarding, exhausting, and fun. But there are days when it’s just plain hard work. So, along with attendees at our recent CIPR Inside Ask the Guru event, we’ve identified some of those common blockers to creativity and shared our advice on how to overcome them. 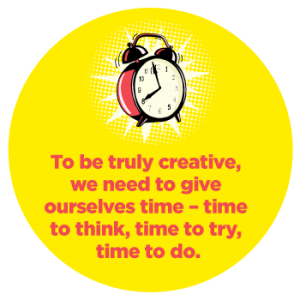 How often do you respond to the question “how are you?” with “busy”. We’re betting most of you and chances are it’s completely true. But when does busy cross over into procrastination, and when does important become urgent?

Distinguishing between these two states can be key to unlocking time in your day. If you really want to be creative, you’ll find the time. Whether that means prioritising it over something else that actually isn’t that urgent, or realising that your emails can be filed another day giving you half an hour to do something you really want to.

To be truly creative, we need to give ourselves time – time to think, time to try, time to do. But we can be our own worst enemies, especially when it comes to our next point…

“What if people think my idea is rubbish?”

Being creative involves putting your thoughts and ideas out for public consumption. That can be truly terrifying. It can feel like your credibility, reputation and ultimately your feelings are on the line. So, of course it’s safer to say you’re too busy, than to actually get down to the business of creativity.

And sometimes it’s not your fear of failure that’s the issue, but your stakeholders. Asking senior stakeholders to take a risk and do something different is fraught with difficulties. Even if they tell you they want something creative, chances are when it’s presented to them, they’ll go with the way it’s always been done before.

It’s really important to remember that when it comes to creativity, there’s no such thing as failure. Even the wackiest ideas can be shaped and fine-tuned, or spark an idea in someone else. But if you never say it out loud, you run the very real risk of not having any impact or adding any value.

Keep in mind this gem from Albert Einstein: “The definition of insanity is doing something over and over again and expecting a different result. I regret the error. However, this is where the fun begins.”

“I don’t have anyone to bounce ideas around with” 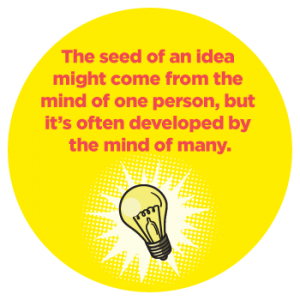 The seed of an idea might come from the mind of one person, but it’s often developed by the mind of many. Creativity loves company, so if you work on your own whether as an independent consultant or you’re a team of one, being creative can be tricky.

But the internal comms world is a pretty tight network of awesome people doing impressive things, who would be more than happy to listen and share their feedback.

Although sometimes hearing other people’s opinions can cloud your own thinking, or take you backwards when what you really want is to continue moving forward. Saying it out loud to inanimate objects (ideally when you’re by yourself), mind mapping, or looking for inspiration in places like Pinterest, could be just as useful for developing your idea as collaboration.

For people who don’t spend their days being creative, the creative process might seem strange. Sharing ideas before they’re fully formed in order to get feedback and develop them can lead to them being misinterpreted. Stakeholders or colleagues might not ‘get’ your idea when it’s at such an embryonic stage and dismiss it out of hand.

Explain to them that creativity doesn’t start with a fully formed idea, that you want to be able to run things past them without expectation or judgement, to develop something really great. They’re likely to be more supportive if they understand that from the very beginning.

“I have a really small budget”

Only a lucky few IC pros have seemingly endless budgets to make their creative ambitions a reality. However, the idea that creativity must cost money is simply not true. You only have to look at some of the great work being done by charities and public sector organisations to see that creativity often involves using the resources you have around you in an interesting way.

A great place to look for inspiration is award winners, as many have achieved their accolade through being creative and resourceful despite budgetary restrictions. You’ll find plenty of case studies on relevant industry body websites or at conferences.

What creative blockers would you add to this list and how do you overcome them? We’ll be discussing this again on our CIPR Inside webinar on 19 May, along with why creativity is important and hints and tips on how you can become a more creative internal communicator.

You can book your place on the CIPR Inside website to join in the conversation – we hope to see many of you there!